Proud to continue the tradition of quality and personal service 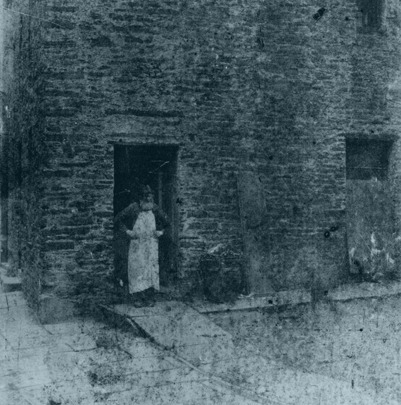 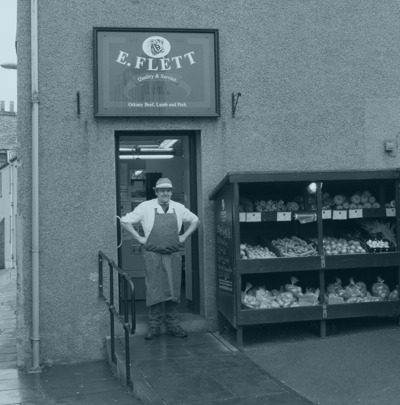 The Stromness firm of E. Flett is now being run by the fifth generation of people with a direct link to its founder.

The business was started in 1876 by Adam Flett when he returned from Canada after working for the Hudson’s Bay Company.  He was followed in the firm by his son James and then his grandson Eric, who added the initial E to the firm’s name which has become synonymous over the years with quality and personal service.

In 1954 Eric took on Ally Park as a delivery boy at the age of 9, and later, Davie Garson, who both went on to become partners in the firm.

Ally’s son, John, joined the business in 1978 as a delivery boy who went full time in 1984, being taught the trade and traditional skills by both Eric and his father. Ally retired in 2002 after 48 years in the business and Davie retired earlier this year after 52 in the business –  leaving John as sole partner to take the business forward for the next generation. In fact, his oldest son, Erik, is already keen to follow in his father’s footsteps and become a butcher, so the tradition looks likely to continue for quite some time yet.

The shop premises have increased in size greatly since Ally joined the business. It used to be a fairly narrow shop which ran end-on onto the street – with raw carcases hanging up on a rail at the far end – which customers could point to and identify the cut of meat they wanted.and it would be prepared in front of them.

Now with the advent of much stricter health and hygiene rules, all the meat is set out in refrigerated display counters with cooked meats being kept separate from raw products.

A dedicated area behind the shop is set aside to cook the added-value meat dishes. 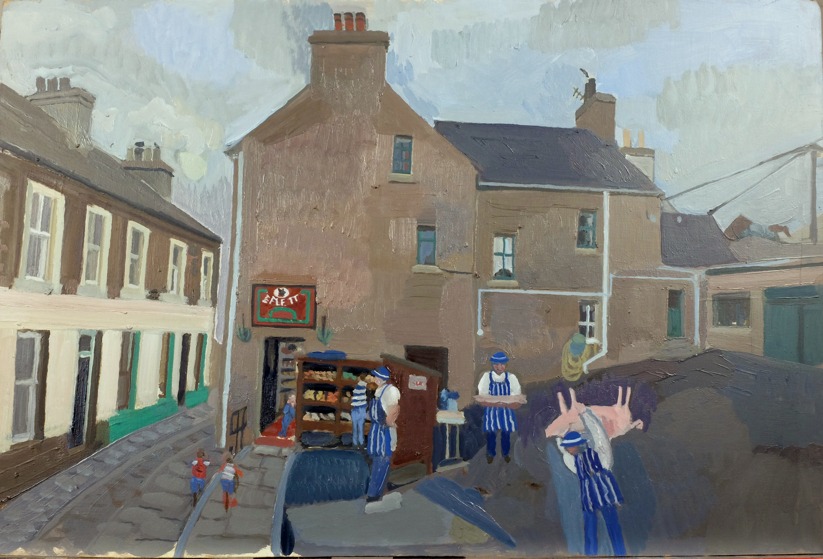 Ally recalls that when he first started with Eric Flett it was a struggle to win business,  because they were the smallest of four butcher shops in Stromness – Harcus’s at the South End, Mortimer’s in Graham Place, Shearer’s in Victoria Street and E Flett’s at the North End. He feels a sense of pride now that although the other butcher shops were all bigger, Flett’s has ‘seen them all off’ and is still going strong.

Ally is just old enough to have started work around the time that rationing came to an end after World War Two, which obviously affected butcher shops like E Flett’s.

Ally explained: “In rationing time, Eric couldn’t buy out of the open cattle ring. You just got an allocation. But when that was lifted, he went into the mart that Monday and he bought a quality beast of his choice and he never ever changed his philosophy. He stuck to quality every time. He emphasised quality to me and John. He bought the first beast to sell for over £100 at Stromness (West Mainland) Mart. That was at the Christmas Fatstock Show – a beast fae Jock Work of Ness in Stromness.”

Ally also described how the business gradually expanded through the years.

“The legs of beef were hanging in the shop, first I worked here. The cutting up and boning was all done there too. There was nowhere else to do it. The cold room – across the courtyard – was only added later, in the mid-60s. Tom Craigie had a saddler’s shop. He had a wooden shed. He shifted down to where the coffee shop is now. Eric bought the building and replaced it with a flat-roofed extension to make a cutting room with a walk-in chiller. Two men came up fae Sooth to install it. The great thing about it was that you could hang two, maybe two-and-a-half beasts, in it and we used to pack other stuff in there too, to keep it refrigerated. We used every space. We thought we were the ‘bees knees’ when we got that. Eric was right proud of it. When you think about it, he was actually ahead of his time when he created a cold room to store the carcasses. There was no room in the shop at that time for refrigerated counters or anything. It was that small and narrow.”

Ally Park started work as a delivery boy for E Flett’s at a very young age.

“I went round every Monday and Friday night to about 17 or 18 customers’ houses after school with a notebook to get their order. I delivered it then the next day before I went to school. I was nine when I started. I was so small that they put wooden blocks on the pedals of the bike so that I could reach. When Edith (Ally’s wife) was doing the deliveries in the van, older women would put in their orders with her and she would also take a parcel from them and post it or they would ask her to get a loaf or sugar for them maybe, too. It was just all part of the service.”

Despite suggestions to continue with his studies, Ally was determined to go into the butchery business.

“Bill Groundwater, the surgeon’s father, when he was Rector of Stromness Academy, thought I should stay on at school. But I told him that I wanted nothing else but to leave and become a butcher. I couldna wait.”

Ally’s son, John, had a similar interest in becoming a butcher when he was still at school.

“I was kinda the same. I was always going to come here to work which was good, because I was never forced to do homework and stuff like that. My brother and sister got made to do homework, but I got off with it. Some of my pals went off to the fishing and got big money. But I always wanted to be a butcher. Eric (Flett) was still here then. It is 30 years ago now since I left school. I started here about the same age as father doing veg and stuff. I mind on Saturday mornings, in my first year, making dog mince or ‘woofy‘ as it was called. When I first started the sausages had to be linked by hand. Now you just put it all into the top of the machine. You press the button with your knee and the sausages all come out linked. You used to have to mix it all by hand too, whereas now the machine does it for you, which is better because the batches are bigger.”

Diagonally opposite the shop door, in the corner of the courtyard complex, is a large storage area for perishable produce, as John explained.

“There is a big freezer and a big chill or cold room in here where all the orders have to be wrapped and kept separate. The fruit and veg is kept in here too. There was no pre-packing or vacuum-packing when my Dad started. What a benefit that is for keeping things fresh.”

But the facility which John is most proud of is the large chill room which was only created within the last couple of years. It runs parallel to the street, at the rear of the complex of outbuildings.

“You could easily get five beasts in here with all the boxes and shelves. It used to be a smaller chill, with storage alongside. But we extended the size of the refrigerated area which is ideal. Environmental health and hygiene regulations have pushed all the changes within the premises – including increasing the size of the shop to get refrigerated cabinets in it; and creating a completely separate cooked meat area where products are vacuum-packed and stored, to avoid any risk of contact with raw meat.” 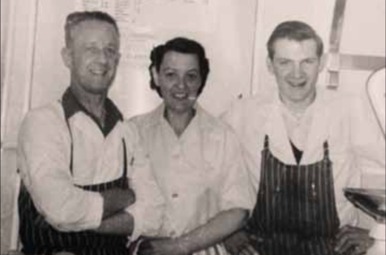 Former owners Eric and Jean Flett, with Ally Park
– pictured in the butcher shop in the early 1960s 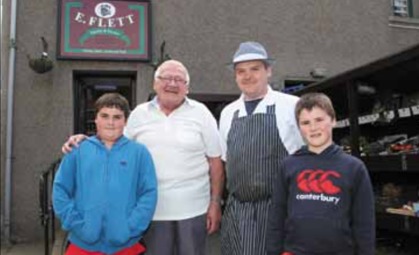 “We ken where all our meat comes fae. We put a sign up in the shop each week to say where the beasts come fae – the beef, lamb and pork – because it is all local. An awful lot of folk like to see we’ve got beef from such and such a farm or whatever.

Eric Flett learned his trade from his father and grandfather, and Ally Park was taught those same skills by Eric. In turn, Ally has passed them on to his son, John, who is now taking on the business with the help of his wife, Janette, sister and nephew, as well as a highly skilled, small team of shop staff and butchers.

Ally recalls “Eric was a stickler for detail. You were taught the right way. The first time I rolled a brisket, I thought I hadn’t made a bad job of it, but Eric just took the knife along all the strings and said ‘Do it again’. That was how I was taught. If you learn from the best, it is not a bad thing. You have to rely on your name and reputation that has been built up over the years  If you give quality guaranteed and the personal touch, that is what people are looking for.”

Janette Park left her job as a curator with Orkney Islands Council’s museums service to join her husband in the Stromness business. She gave her thoughts on the move.

“It is easier for family life. It is quite nice not having to drive to Kirkwall every day and being able to nip to the school if there are things on. But with Davie and Doreen retiring and John taking on the business, I felt I wanted to come and support him, and now that the boys are showing an interest in following in their Dad’s footsteps, it is for the future of my family that was the driving factor for me making the change. But I’m still keeping a hand in with Stromness Museum and occasionally am called on for the Orkney Museum. So I am not foregoing my museum work altogether.”

In the relatively short time that Janette has been involved in the running of the butcher shop, she has been very aware of how accommodating all the staff are in dealing with customer requests.

“The thing I hear most frequently is ‘Yes, no bother at all’ whether it is to customers in the shop or on the phone. I think that should be the catchphrase for E Flett, Butchers. We still do favours and get other shopping for customers and deliver it to the boat or to their house. We’re flexible. We can try and meet customer needs in an individual kind of way which other shops can’t.”

John has lived and breathed the butchery business all his adult life and he admits that it doesn’t allow him much spare time.

“It involves long hours. I’m here before five o’clock in the morning to nearer six o’clock at night, six days a week and on Sunday mornings to do bits and bobs for the start of the week. So I don’t have a big social life. I try to fit in the odd round of golf. The boys both play golf, so they try and get me out on the course a bit.”

Janette spoke about the next generation of the Park family who appears to be keen to follow in his father’s footsteps and become a butcher, so the tradition looks likely to continue for quite some time yet.